While I started bookstagramming (is that a word? oh well.) in late 2016, I never did it consistently.  I started this blog at the end of April, and I’ve been posting a lot more consistently since then.  So, I decided to compile my favorite photos I posted this year, and why I love them so much!  (The order doesn’t matter.)

Despite never having been a camp counselor (or having attended camp at all), I still have this super cute tank top that says ‘camp counselor’ on it (that I may or may have not misplaced…oops…) that worked perfectly to go along with the content of this book.  While the tank top rocks, I didn’t want to have a bunch of blank space behind and around it an the book.  My grandparents had actually given me almost all of their old photo albums around the time I read this book and asked that I take out all of the old photos that they didn’t want anymore.  (But we all know I kept them because they’re pretty and retro and I love them). So I took some of the photos (trust me, there were A LOT of them) that were nature-y and beautiful, and I thought related to the content of the book and also complimented the colors in the book cover nicely.  It ended up looking absolutely gorgeous, and I’m super happy with how it turned out!  I posted that on Instagram (all of these photos come from my review account, @cityofglamour) on January 9th.  Crazy to think that was almost a year ago!  Definitely doesn’t feel like it.

‘By Your Side’ by Kasie West

For the majority of this book, the characters are trapped in a library.  Plus, I’ve always wanted to layer a bunch of books on top of each other to take a cool photo, and this plot gave me the excuse to do it.  Honestly, this was back in parch and I can’t really remember, but I’m pretty sure that I used all Kasie West books underneath BYS.  Don’t hold me to that though.  You can kind of see in the photo that there’s a crease down the front.  Yeah.  That happened in my backpack, I had been carrying it around school hoping to find some time to start it, and that happened.  I may or may not have totally flipped out but ugh let’s not talk about it because I’ll get mad all over it.  Shoutout to high school for ruining my book *insert laughing emoji here with your imagination because I’m using my computer right now and can’t*

Why is there so much orange in this picture, Courtney?  There’s not that much orange on the cover.  That’s true.  However, the ARC highlight is orange, and my mom has a lot of orange baking and cooking items, since it matches the color scheme of our kitchen, or orange it was.  Jill loves baking in the book, and even has a super secret cookie recipe that Katy gave out to readers, hence the chocolate chip cookies.  While they may look like they taste good, they didn’t.  Okay well actually I didn’t have any because I hate the taste of chocolate, but I needed to make some fast for the photo, so I ended up using pre-made cookies I found in the freezer that ended up being freezer burned and actually burned in places.

The lighting on this photo was all natural from the window, and it make the desk background look awesome-ly white.  Honestly, I read this book about nine months ago and I can’t remember all the details, but I’m pretty sure that Reagan, the main character, loved photography, otherwise it would have been stupid for me to put a camera in the photo.  So while it’s simplistic, I like how the camera stands out and the background is solid so it doesn’t take away from how colorful the book is. 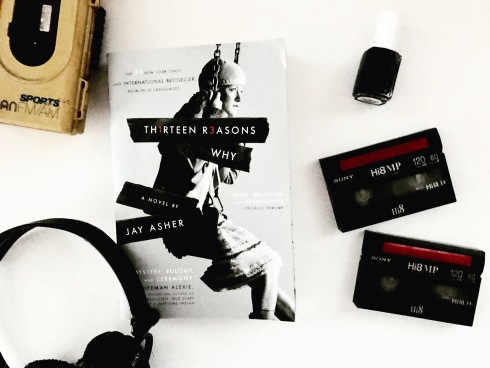 ‘Thirteen Reasons Why’ by Jay Asher

You can’t tell by the way I edited the photo, but the nail polish was actually a deep blue, in reference to the book.  Every since prop in this is in reference to the book.  (Can you tell I’ve read it a billion times?)  The tapes, walkman, and headphones are obviously all central to the plot, as I’m assuming between the book and the TV show, you’ve all heard about the story.  Anyway, I just love how it turned out!

‘You Don’t Know My Name’ by Kristen Orlando

I tried out a few different photo arrangements I think before I settled on this one.  (Seriously, you should see my camera roll, it’s a mess.). I knew I wanted to use some of my vinyls since I had both black and red, but the red was super vibrant and I just loved it.  I actually have another photo on @buriedinabookshelf of this book with the same vinyl, I just added in more props for that one that were with the black and red color scheme.  I added the splash of white of my ears because that’s what Reagan is wearing on the cover.  It’s just overall colorful and aesthetically pleasing, and I love it!

‘The Heartbreakers’ by Ali Novak

Okay, so this might be my favorite photo I’ve ever taken of a book ever.  Like literally ever.  The lighting was perfect by some miracle, and it’s just awesome.  Stella loves photography and it’s a huge part of her story, so of course I had to include a nice camera in there.  She’s VIP on the tour (eventually), so I included a VIP pass I had from a meet and greet.  (Although you can’t see it, it’s actually from an Against the Current concert!). The other tour pass with the four boys on it is from a 5 seconds of summer concert, and that worked out perfectly because there are four boys in the Heartbreakers!  I just thought the flower was pretty, so I added it to bring out the pink in the title of the book.  The guitar pick and charm is also a nod to the plot and Oliver too!  I wanna say that Oliver gives Stella a guitar charm or some sort of charm, but I’ve only read the book two or three times and I don’t remember. 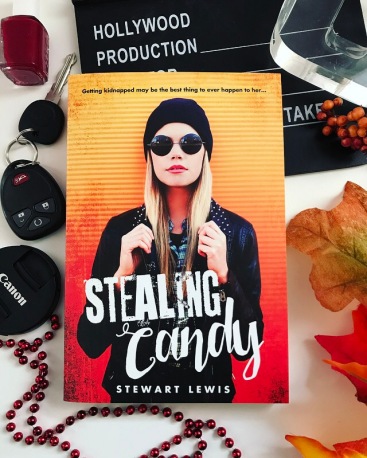 A lot of the props in this one have to do with the story, but also the color scheme.  The clear ‘C’ in the top right corner is because the main character’s name is Candy (characters with ‘C’ names, I gotchu.  My name’s Courtney, so I have a few initial things haha). The acting slate and the Canon lens cap is because she loves filmmaking.  The car keys are there because most of the book takes place in a car, and the red nail polish, beads, and leaves just match the cool ombre on the cover of the book.  I actually originally posted my ARC review with a photo of the ARC that I read,  but since the cover of the ARC went through drastic changes from the ARC to the finished copy, Sourcebooks Fire actually asked me to take a new picture with the new cover and repost my review instead, which I gladly did!  So shoutout to them for sending me the beautiful finished copy!

The little hanging pennants (I think that’s what they’re called….) are inspired by the ones on the cover.  I spent wayyy too much time cutting out little pieces of construction paper for that, but at least it paid off!  The money is in relation to the tip jar, and I was also able to use the coins to hold down the front cover since it was bent up from me reading it.

So for this one, I took a huge sheet of paper and just painted it with colors that are included on the front cover.  The main character, Abby, loves to paint, and it’s a huge part of who she is and her overall storyline.  I even painted a really bad heart (yeah, painting isn’t my strong point) because the story is a love story after all!