I had the privilege of interviewing Karole Cozzo, the author of the new Swoon Reads release ‘The Game Can’t Love You Back’! It’s her third novel, and you can preorder it at your local bookstore or at one of the links included down below! (If you’re interested in reading a spoiler free review, you can read my ARC review here!)

Eve is used to being the odd woman out. As the only girl on her school’s baseball team, she knows exactly how to put sweaty, macho baseball players in their place, and she’s focused on one thing and one thing only—being the best pitcher she can be.

But when a freak accident forces her high school to be absorbed by the neighboring town, Eve has to contend with a new group of guys who aren’t used to having a woman on their team. And the new team’s star pitcher, Jamie, has no interest in being ousted from his throne. He can’t afford to give up his starting slot to a new pitcher—even worse, to a girl.

As the competition between Jamie and Eve starts to heat up, so does their attraction to each other. Can they keep their heads in the game, or will they end up getting played?

COURTNEY: What inspired The Game Can’t Love You Back, and how long did it take you to write the first draft?

KAROLE: I live in the Philadelphia area, and a few years ago it was all over the news about a local female pitcher who had an amazing performance in the little league World Series. She seemed like such a bad-ass and it made me really interested in writing a female character who played baseball after most girls transition to softball or other sports. I’d written about six chapters of this story a long time ago, and then put it aside and wrote The Truth About Happily Ever After instead. I returned to the story afterward – maybe after writing about theme park princesses I was ready to go in a completely different direction! I typically finish a first draft in 3-4 months, and second time around, that was the case with The Game Can’t Love You Back as well.

COURTNEY: What inspired you to choose baseball as the center sport of the book?

KAROLE: As I mentioned above, the idea came to me directly from reading a story about a female baseball pitcher.  I never though about using a different sport for this story.  We don’t read too many stories about female baseball players, so I liked that angle.  When the show Pitch came out, at first I was disappointed, because I was already midway through the story and wanted it to be totally original.  But then I came to loooove Pitch and I’m still really bummed it got cancelled.

COURTNEY: Which character changed the most from the first draft to the finished copy?

KAROLE: Hmm, that’s tough! Both my main characters are stubborn and tough, and I sort of “knew” them from the get-go. But if I really think about it, I think my editor and I softened Jamie up the most. We wanted him to be appealingly arrogant, but we didn’t want him to read as an asshole, obviously! He had to talk a fine line between being a “player” and coming across as completing demeaning or disrespectful toward women. So if anyone changed, it was him.

COURTNEY: If TGCLYB were to be adapted into a movie, who would be your fan cast for Eve and Jamie?  (Feel free to add any supporting character fan casts here too!)

KAROLE: So. I LOVE fancasting, but I”m terrible at doing it myself. I am never satisfied with what I come up with. That being said, I love when I see who other people choose (hint hint) – what do you think???
See the end of this post for my ideas!

COURTNEY: Can you see yourself writing another book with any of the same characters from TGCLYB? (Whether it’s a continuation of Eve and Jamie, Marcella or Scott, etc.)

KAROLE: I can always see myself spending more time with the characters I come to know and love, but… in reality? It’s probably not going to happen. Most contemporary YA romance novels exist as stand-alones, and that’s probably going to be the case with this one. And, ha, I’m not sure if Eve and Jamie can keep getting along for the duration, and I’d hate to see them break up. 😉 I’m not above writing some extra chapters or deleted scenes though – that’s something I really enjoy! So stay tuned, because you might hear more from them. When Swoon Reads publishes a paperback follow-up to the initial hard-bound release, they typically include some swoonworthy extras, and I’d love to write some moments from the future between these characters.

COURTNEY: What was your favorite scene to write?  What scene are you most excited to have readers read?

KAROLE: That’s tough – I have a hard time picking! There are so many wonderful snarky exchanges between these two. But I think probably my favorite scenes to write were when they both acknowledged they had feelings… and were totally distraught to realize this, haha! I was smiling my face off when I was writing those parts – when they finally admitted to themselves that something was going on there. I’m also really excited for readers to read the pull-up scene because, well, it’s hot and three cheers for UST!

COURTNEY: Which scene was the hardest for you to write?

KAROLE: Spoiler alert! The first kiss. These two had been battling with each other for so long, I had a hard time getting them to put their defenses down and actually physically come together for the first time. I just couldn’t get it to gel. The good news was, once they started kissing… they had no problem doing it again. 🙂

COURTNEY: Was there a scene that you absolutely loved that you had to end up cutting from the final draft?  If so, can you tell me anything about it?

KAROLE: Oh my gosh, absolutely! In one scene on the team bus, I had Eve and Jamie get into a freestyle rap battle. I was sooo proud of myself for coming up with some lyrical stylings for the two of them, and I thought it was such an awesome exchange. My editor agreed, in theory, but gently pointed out that teenagers rapping back and forth didn’t translate to the page in the way I imagined it in my head. So it had to go, but if you must know, Eve totally shut Jamie down (of course).

COURTNEY: Is there anything else you’d like to add?

KAROLE: I’m SO excited to share this book with the world next month! Please be sure to follow me (@KACozzo on twitter and Karole Cozzo on IG) – there will be some giveaways with some baseball-themed goodies coming up soon.

Thank you so much to Karole for answering my questions!  The Game Can’t Love You Back will be released by Swoon Reads on May 15!

PREORDER ‘THE GAME CAN’T LOVE YOU BACK’ HERE:

Okay, so here’s my fan casts for the two lead characters, Eve and Jamie.  They aren’t ridiculously accurate, but they were the best that I could think of.  Leave your own fan casts in the comments!

Victoria’s 25, so that’s definitely above our girl Eve’s age, but she was the only one I could think of as a fan cast.  I’ll add more later!  I totally totally LOVE the model on the cover/back cover of the book for Eve, so it was hard to compare.

Peyton’s 19, so the perfect age range to play Jamie.  Plus, if we’re being totally honest, I’ve had a crush on him for years.  What do you guys think? 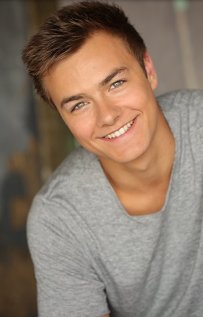 8 thoughts on “[AUTHOR INTERVIEW] Interview with Karole Cozzo, Author of ‘The Game Can’t Love You Back’!”