If you love college and football stories, here’s the book for you!

Badass Athlete: I dare you to…
Delaney Shaw: Who is this?

The late night text is random, but “Badass Athlete” sure seems to know who she is…

His dare? Spend one night in his bed—a night he promises will be unforgettable—and she can solve the mystery of who he is.

She knows she shouldn’t, but what else is she going to do with her boring Valentine’s Day?

One sexy hook-up later, her mind is blown and the secret’s out.

Maverick Monroe.
Bad boy.
The most talented football player in the country.
Just ask him.

Too bad for him Delaney’s sworn off dating athletes forever after her last heartbreak.

But Maverick wants more than one night and refuses to give up on winning Delaney’s heart. She isn’t one to be fazed by a set of broad shoulders.

Will the bad boy land the nerd girl or will the secrets they keep from each other separate them forever? 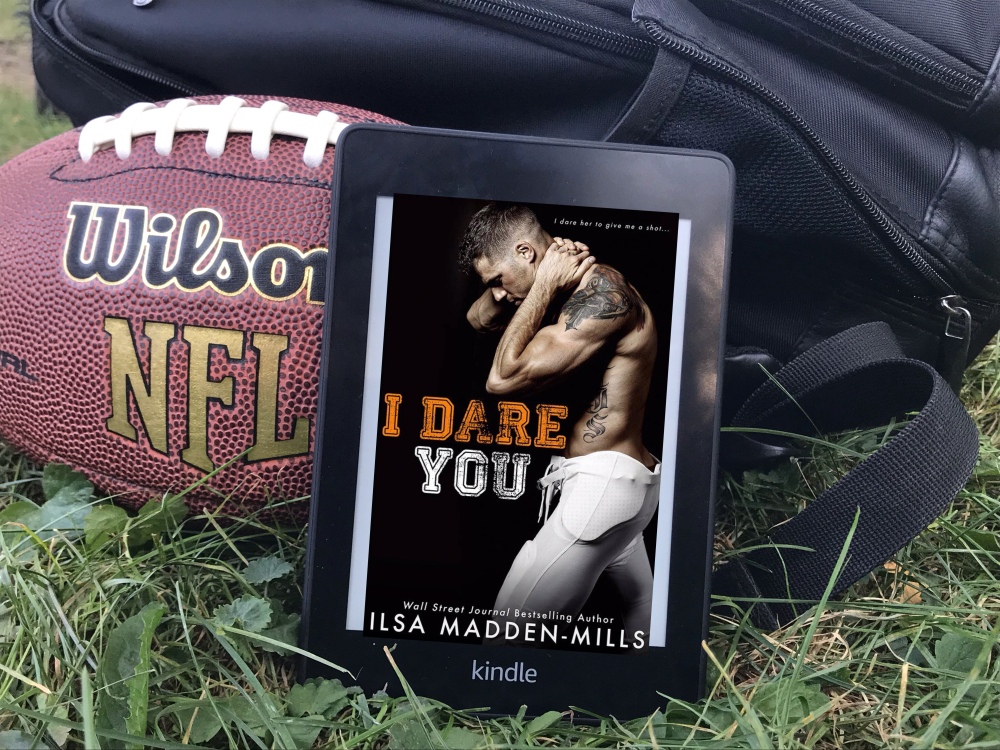 “I Dare You” follows Delaney and Maverick, two college students who meet freshman year at a bonfire and share a kiss. At least, in the prologue they do. We then jump two years ahead to their junior year. Maverick is a crazy popular linebacker, and Delaney is a graphic design student.

The book is told from two POVs, (1) Delaney, and (2) Maverick. There are more chapters from Delaney’s POV, but overall there’s a nice balance.

I liked how their relationship seemed to develop at a solid pace. I did think that Maverick was a bit too cocky when he was flirting with Delaney though. Like, dude. Take a chill pill.

Anyway, I felt as though his tragic backstory was well thought out and portrayed well. For all his faults (not to say that he has a ton of them, just saying…) and mistakes that he makes, his heart is in the right place.

Delaney was a fun character to read a POV from. I admire her confidence and poise when dealing both with Maverick and her ex, Alex. She’s definitely someone I would love to be friends with.

The book even includes recipes at the end for the deserts that Delaney makes in the book!

The book is new adult/college YA which I was excited about, since it’s so hard to find books set in college, especially in years that aren’t freshman year. Due to the sexual content that happens a few times, the book is probably best suited for readers 17+, but I’m not going to tell you how to live your life.

Overall this was a really good book, and I couldn’t put it down. I’ll be posting the review of the companion novel, “I Bet You,” soon.