Check out the playlist I made for the book!

A princess fleeing an arranged marriage teams up with a snarky commoner to foil a rebel plot in B. R. Myers’ Rogue Princess, a gender-swapped sci-fi YA retelling of Cinderella.

Princess Delia knows her duty: She must choose a prince to marry in order to secure an alliance and save her failing planet. Yet she secretly dreams of true love, and feels there must be a better way. Determined to chart her own course, she steals a spaceship to avoid the marriage, only to discover a handsome stowaway.

All Aidan wanted was to “borrow” a few palace trinkets to help him get off the planet. Okay, so maybe escaping on a royal ship wasn’t the smartest plan, but he never expected to be kidnapped by a runaway princess!

Sparks fly as this headstrong princess and clever thief battle wits, but everything changes when they inadvertently uncover a rebel conspiracy that could destroy their planet forever. 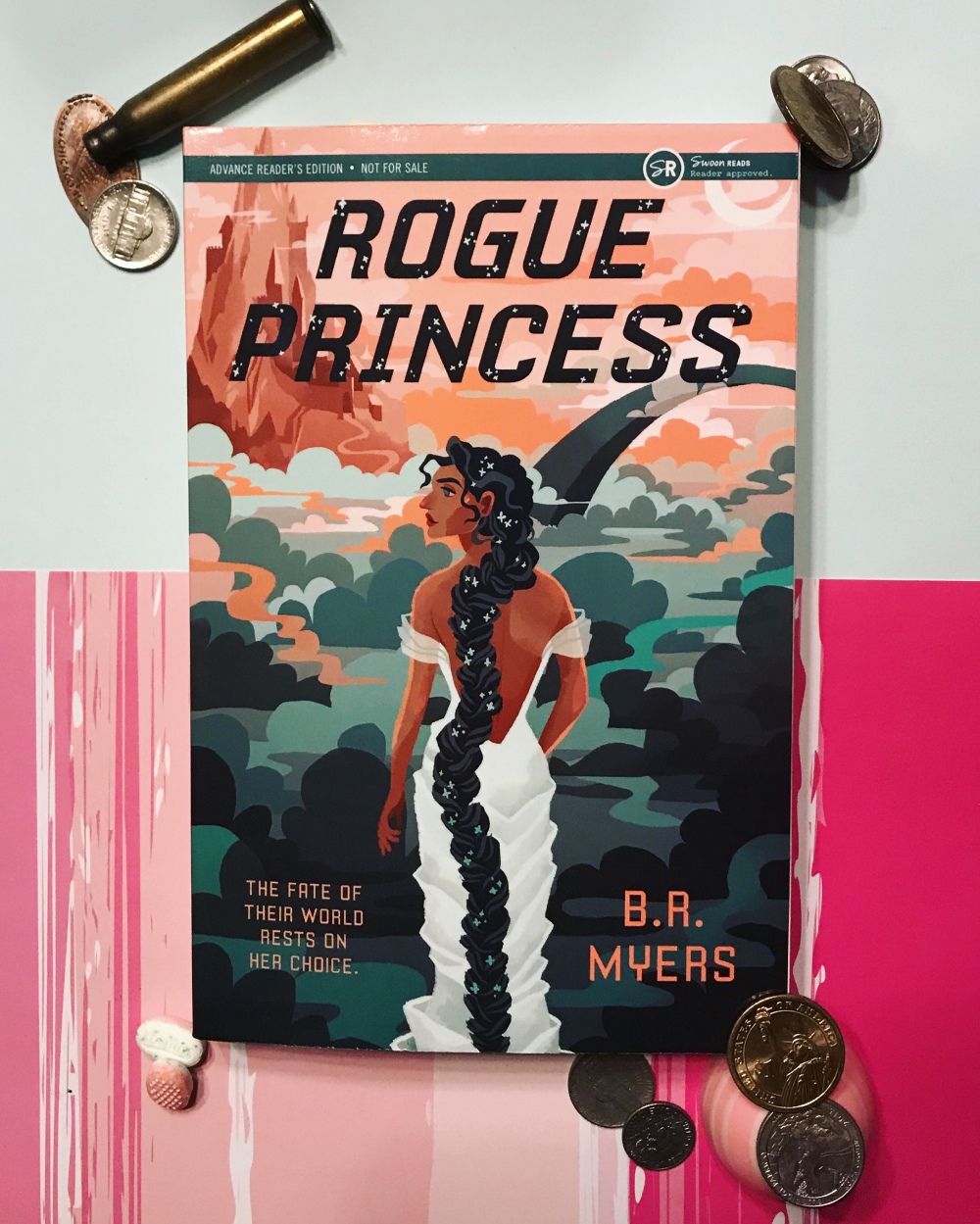 Full of twists, turns (and of course, romance!), Myers’ has crafted a gripping story that examines what really makes us human.

I was hooked as soon as I read that this was a gender-swapped sci-fi retelling of Cinderella. I’ll admit, I’m not always the biggest fan of princess retellings, but knowing that this book flipped the genders of the original fairytale made me excited to read it. Besides, as the book goes on, it loses a bit of the elements of a Cinderella retelling. That’s purposely vague as to not give anything away, so I guess you’ll just have to read the book to find out what I mean!

Speaking of the princes — at first, I found it a bit difficult to keep them all straight. I definitely had assumptions about some of them that turned out to be false, or thought I was connecting dots that ended up not being there. I definitely looked way too into Prince Felix always clicking his heels whenever he walked away, and the comment about how clean the Pirates’ ships were. (Without giving anything away though, I would definitely read a companion novel about Prince Quinton …just saying.)

Delia was a wonderful heroine. Strong, smart, and powerful, she was a perfect blend of dutiful Queen-to-be and warrior princess. Although I’m not a huge fantasy or sci-fi reader, I have read my fair share of books involving royalty, and it was really great to read a book where the girl was the one with (almost) all of the power. The gender-norms of how princes and kings are portrayed in books was something that I never really noticed until I read a version where the roles were switched. Obviously, I knew the gender roles would be flipped going into the book, but it was still interesting to read about Delia constantly saving Aiden, when typically it would be the other way around. Through all of the books I have read (and just by living in our society), I never really knew how deeply those norms were ingrained in how I expect a book (or film!) to go.

I loved Aiden too! If you’ve been reading my blog for a bit, you’ll know that I adore witty banter, and Delia and Aiden don’t disappoint! Although their romance felt like it moved at a super-fast pace, I suppose getting into a bunch of life and death scenarios with someone would make the time seem not so significant. The technology present in the book reminded me of Bladerunner, at least on a very surface level. (You know, because I definitely didn’t fall asleep watching that movie for a class last year…)

Delia’s relationship with her mother, the Queen, kind of defied my expectations as to how normal mother-daughter relationships are portrayed, which reminded me that the book was gender-swapped. (It also wouldn’t have made a whole lot of sense for some of the plot if they were close.) She and her sister, Shania, had a great relationship though, and I loved how there was no backstabbing between the two of them. (Not considering that a spoiler, since it’s something that I wouldn’t have wanted to happen in the first place!)

Overall, I thought this was a great book! The chapters were relatively short, which would have made it easy to spread the book out over multiple days, instead of binging the majority of it in one. All of the characters were unique and interesting, and I think the book would do well with a media adaptation.

Thank you to Swoon Reads for sending me a copy to review! “Rogue Princess” will be released by Swoon Reads on January 21, 2020.