Can you believe it’s June already? (To be fair, we have been losing many months to COVID-19.) We’re just about halfway through the year of new books! Luckily, there are a bunch of great ones coming out this month.

Let me know in the comments below which releases you’re most excited for!! If I don’t have them on this list, I’ll be sure to add them!

For fans of Sadie and Serial, this gripping thriller follows two teens whose lives become inextricably linked when one confesses to murder and the other becomes determined to uncover the real truth no matter the cost.

When Anna Cicconi arrives to the small Hamptons village of Herron Mills for a summer nanny gig, she has high hopes for a fresh start. What she finds instead is a community on edge after the disappearance of Zoe Spanos, a local girl who has been missing since New Year’s Eve. Anna bears an eerie resemblance to Zoe, and her mere presence in town stirs up still-raw feelings about the unsolved case. As Anna delves deeper into the mystery, stepping further and further into Zoe’s life, she becomes increasingly convinced that she and Zoe are connected—and that she knows what happened to her.

Two months later, Zoe’s body is found in a nearby lake, and Anna is charged with manslaughter. But Anna’s confession is riddled with holes, and Martina Green, teen host of the Missing Zoe podcast, isn’t satisfied. Did Anna really kill Zoe? And if not, can Martina’s podcast uncover the truth?

Inspired by Daphne du Maurier’s Rebecca, Kit Frick weaves a thrilling story of psychological suspense that twists and turns until the final page.

“You Should See Me In A Crown” – Leah Johnson

Liz Lighty has always believed she’s too black, too poor, too awkward to shine in her small, rich, prom-obsessed midwestern town. But it’s okay — Liz has a plan that will get her out of Campbell, Indiana, forever: attend the uber-elite Pennington College, play in their world-famous orchestra, and become a doctor.

But when the financial aid she was counting on unexpectedly falls through, Liz’s plans come crashing down . . . until she’s reminded of her school’s scholarship for prom king and queen. There’s nothing Liz wants to do less than endure a gauntlet of social media trolls, catty competitors, and humiliating public events, but despite her devastating fear of the spotlight she’s willing to do whatever it takes to get to Pennington.

The only thing that makes it halfway bearable is the new girl in school, Mack. She’s smart, funny, and just as much of an outsider as Liz. But Mack is also in the running for queen. Will falling for the competition keep Liz from her dreams . . . or make them come true?

“A Song of Wraiths and Ruin” – Roseanne A. Brown

The first in an fantasy duology inspired by West African folklore in which a grieving crown princess and a desperate refugee find themselves on a collision course to murder each other despite their growing attraction.

For Malik, the Solstasia festival is a chance to escape his war-stricken home and start a new life with his sisters in the prosperous desert city of Ziran. But when a vengeful spirit abducts Malik’s younger sister, Nadia, as payment into the city, Malik strikes a fatal deal—kill Karina, Crown Princess of Ziran, for Nadia’s freedom.

But Karina has deadly aspirations of her own. Her mother, the Sultana, has been assassinated; her court threatens mutiny; and Solstasia looms like a knife over her neck. Grief-stricken, Karina decides to resurrect her mother through ancient magic . . . requiring the beating heart of a king. And she knows just how to obtain one: by offering her hand in marriage to the victor of the Solstasia competition.

When Malik rigs his way into the contest, they are set on a course to destroy each other. But as attraction flares between them and ancient evils stir, will they be able to see their tasks to the death?

Tavia is already at odds with the world, forced to keep her siren identity under wraps in a society that wants to keep her kind under lock and key. Never mind she’s also stuck in Portland, Oregon, a city with only a handful of black folk and even fewer of those with magical powers. At least she has her bestie Effie by her side as they tackle high school drama, family secrets, and unrequited crushes.

But everything changes in the aftermath of a siren murder trial that rocks the nation; the girls’ favorite Internet fashion icon reveals she’s also a siren, and the news rips through their community. Tensions escalate when Effie starts being haunted by demons from her past, and Tavia accidentally lets out her magical voice during a police stop. No secret seems safe anymore—soon Portland won’t be either.

*Check out my ARC review here! Interview with the author coming soon!*

The past tore them apart.

After a terrible accident took everything from Callie Stewart, enrolling at Blairwood University is supposed to be a chance at a new beginning.

Living his best life, Hayden Watson, star wide receiver for the Blairwood Ravens, is heading straight for the NFL draft and nothing is going to stand in his way.

The present brings them together.

Their paths were never supposed to cross, but when they do, all those old demons and feelings come rushing back. Hayden thinks he knows all about Callie’s life before Blairwood and he’s not ready to let go of the past, much less forgive her for what she has done three years ago.

One thing’s for sure… it’s going to take more than a kiss to conquer their broken past.

Note: Kiss To Conquer is an enemies-to-lovers sports romance and it can be read as a standalone novel.

“The Good For Nothings” – Danielle Banas

They’re only good at being bad.

Cora Saros is just trying her best to join the family business of theft and intergalactic smuggling. Unfortunately, she’s a total disaster.

After landing herself in prison following an attempted heist gone very wrong, she strikes a bargain with the prison warden: He’ll expunge her record if she brings back a long-lost treasure rumored to grant immortality.

Cora is skeptical, but with no other way out of prison (and back in her family’s good graces), she has no choice but to assemble a crew from her collection of misfit cellmates—a disgraced warrior from an alien planet; a cocky pirate who claims to have the largest ship in the galaxy; and a glitch-prone robot with a penchant for baking—and take off after the fabled prize.

But the ragtag group soon discovers that not only is the too-good-to-be-true treasure very real, but they’re also not the only crew on the hunt for it. And it’s definitely a prize worth killing for.

Whip-smart and utterly charming, this irreverent sci-fi adventure is perfect for fans of Guardians of the Galaxy, The Lunar Chronicles, and Firefly. 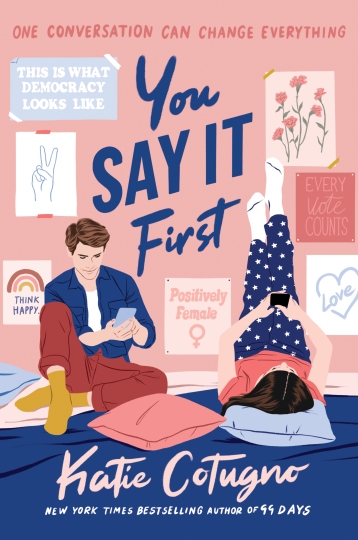 “You Say It First” – Katie Cotugno

Meg has her entire life set up perfectly: her boyfriend Mason is sweet and supportive, she and her best friend Emily plan to head to Cornell together in the fall, and she even finds time to clock shifts phonebanking at a voter registration call center in her Philadelphia suburb. But everything changes when one of those calls connects her to a stranger from small-town Ohio, who gets under her skin from the moment he picks up the phone.

Colby is stuck in a rut, reeling from a family tragedy and working a dead-end job—unsure what his future holds, or if he even cares. The last thing he has time for is some privileged rich girl preaching the sanctity of the political process. So he says the worst thing he can think of and hangs up.

But things don’t end there.…

That night on the phone winds up being the first in a series of candid, sometimes heated, always surprising conversations that lead to a long-distance friendship and then—slowly—to something more. Across state lines and phone lines, Meg and Colby form a once-in-a-lifetime connection. But in the end, are they just too different to make it work?

You Say It First is a propulsive, layered novel about how sometimes the person who has the least in common with us can be the one who changes us most. 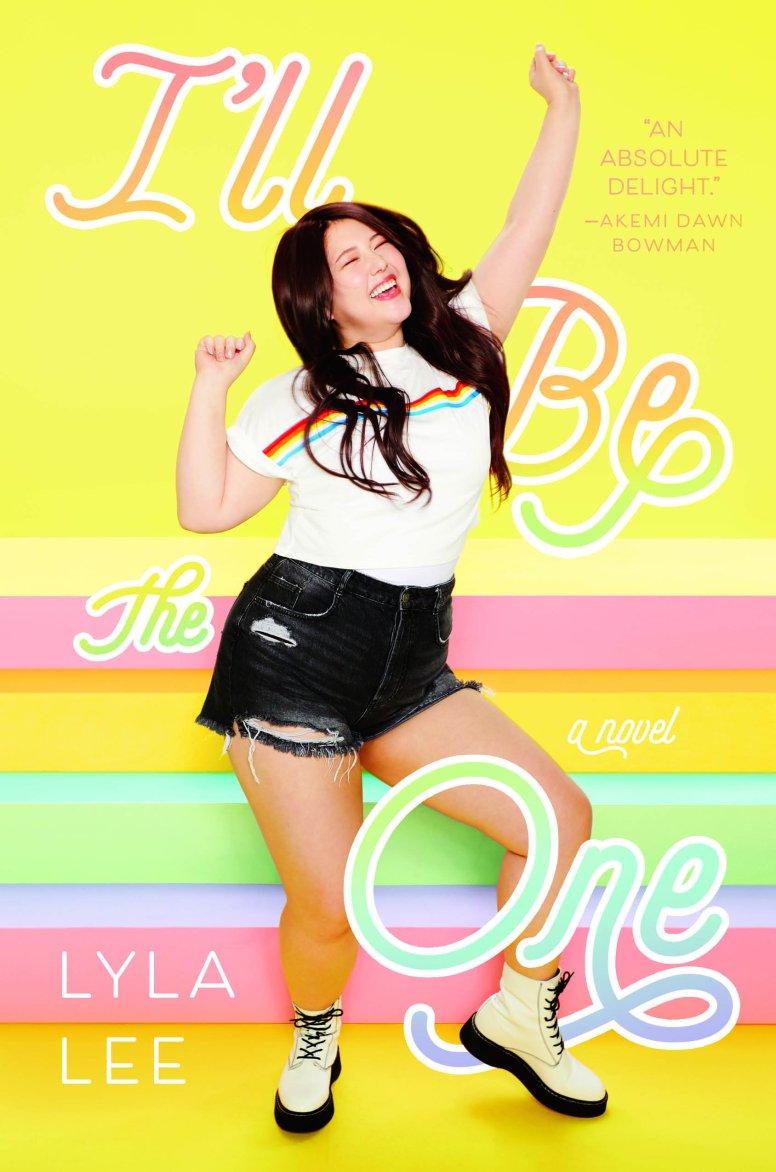 The world of K-Pop has never met a star like this. Debut author Lyla Lee delivers a deliciously fun, thoughtful rom-com celebrating confidence and body positivity—perfect for fans of Jenny Han and Julie Murphy.

Skye Shin has heard it all. Fat girls shouldn’t dance. Wear bright colors. Shouldn’t call attention to themselves. But Skye dreams of joining the glittering world of K-Pop, and to do that, she’s about to break all the rules that society, the media, and even her own mother, have set for girls like her.

She’ll challenge thousands of other performers in an internationally televised competition looking for the next K-pop star, and she’ll do it better than anyone else.

When Skye nails her audition, she’s immediately swept into a whirlwind of countless practices, shocking performances, and the drama that comes with reality TV. What she doesn’t count on are the highly fat-phobic beauty standards of the Korean pop entertainment industry, her sudden media fame and scrutiny, or the sparks that soon fly with her fellow competitor, Henry Cho.

But Skye has her sights on becoming the world’s first plus-sized K-pop star, and that means winning the competition—without losing herself.

A teen girl’s summer with her mother turns sinister in this gripping thriller about the insidious dangers of unwanted attention, from Printz Honor medal–winning and National Book Award finalist author Deb Caletti—perfect for fans of Courtney Summers’s Sadie.

Sydney Reilly has a bad feeling about going home to San Francisco before she even gets on the plane. How could she not? Her mother is Lila Shore—the Lila Shore—a film star who prizes her beauty and male attention above all else…certainly above her daughter.

But Sydney’s worries multiply when she discovers that Lila is involved with the dangerous Jake, an art dealer with shady connections. Jake loves all beautiful objects, and Syndey can feel his eyes on her whenever he’s around. And he’s not the only one. Sydney is starting to attract attention—good and bad—wherever she goes: from sweet, handsome Nicco Ricci, from the unsettling construction worker next door, and even from Lila. Behaviors that once seemed like misunderstandings begin to feel like threats as the summer grows longer and hotter.

It’s unnerving, how beauty is complicated, and objects have histories, and you can be looked at without ever being seen. But real danger, crimes of passion, the kind of stuff where someone gets killed—it only mostly happens in the movies, Sydney is sure. Until the night something life-changing happens on the stairs that lead to the beach. A thrilling night that goes suddenly very wrong. When loyalties are called into question. And when Sydney learns a terrible truth: beautiful objects can break.