*This is an ARC review of a sequel!  It may include some spoilers for the first book, ‘Follow Me Back’, so continue reading at your own risk!

Love. Obsession. Jealousy. Murder. Find this and more in the pulse-pounding sequel to FOLLOW ME BACK, the thriller for the online generation that New York Times best-selling author Anna Todd called “an enthralling page turner from beginning to end.”

No one knows what happened to pop icon Eric Thorn. His Twitter account? Frozen. His cell phone? Cracked and bloody, buried in the snow.

Agoraphobic fangirl Tessa Hart knows the truth, but she’s finally left her #EricThornObsessed days behind. She has no intention of ever touching her Twitter app again. But Snapchat… That’s safer, right?

After months of living under the radar, Tessa emerges from hiding, forced to face the deadly consequences of her past. But in the interrogation room, answers only lead to more questions in the jaw-dropping conclusion to the Follow Me Back duology. 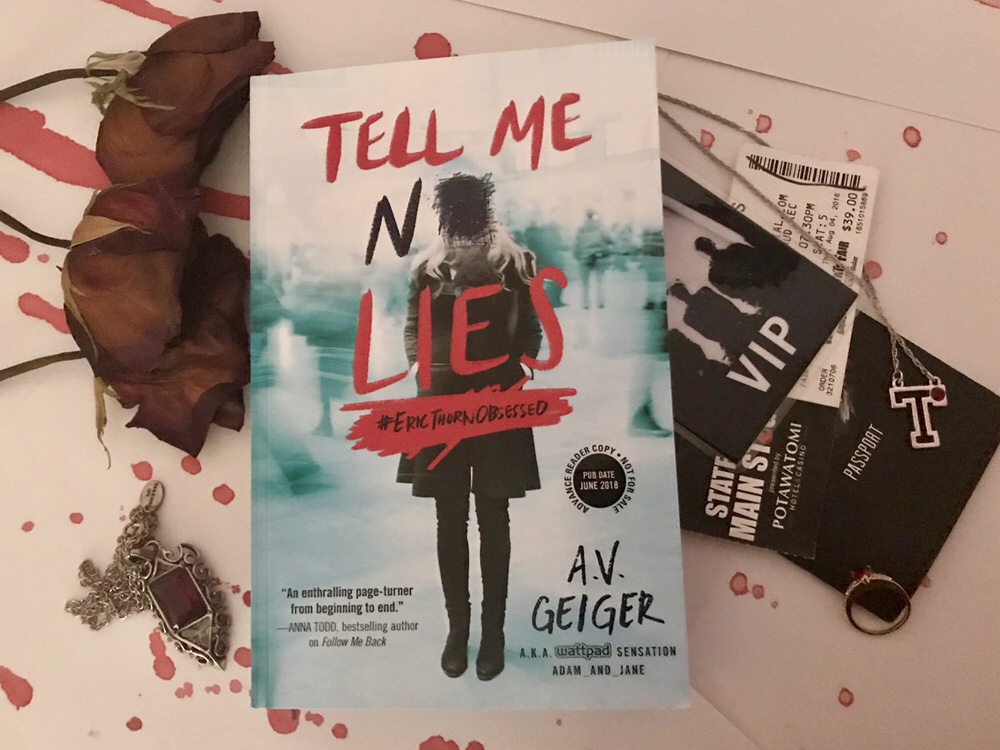 A thrilling conclusion to the ‘Follow Me Back’ duology, ‘Tell Me No Lies’ will keep you guessing right up to the shocking end.

I was lucky enough to read and review an ARC of ‘Follow Me Back’ last year, and became absolutely obsessed (no pun intended) with it.  I actually didn’t know that it was a duology right away, so I was sitting there completely stunned, thinking that it was the cliffhanger to end all cliffhangers.  A book has never left me so speechless, and that hasn’t happened again since.

‘Tell Me No Lies’ picks up a few weeks after ‘Follow Me Back’ concludes.  One thing that I really liked about this book (and about the mini series in general) is that it focuses on the negative aspects of fame.  For example, there’s a scene where Tessa is front row taking a Snapchat story for Eric’s account.  Normally, scenes like this in other books would make it seem like Tessa would be having the time of her life, but it’s not like that at all.  After reading so many books where even though there are some negatives, it’s an overall positive experience, (not that I don’t love those, because you all know I do) but that’s not the case in the FMB books.  Like I said, it’s a nice shift.

For some reason, Tessa came off as unlikeable a few times in this book.  I hadn’t felt that way when reading the first one, but that happened a few times reading this one.  I will say that I enjoyed the first book more, but that’s not really saying much because that’s how I usually feel about all books that have more than one in the series.  Also, I *might* be wrong, but I think at one point in the book it says that Eric’s phone was cracked on Tessa’s bathroom floor, but in the synopsis, it says that it was found in the snow.  Not a big deal, but I just noticed it now.

The shocking twists in this one?!  Shook.  Totally shook.  I didn’t see them coming.  I couldn’t read fast enough, it was so good.  Viv really knows how to hook me in, that’s for sure.  If I had the time, I would go back and reread FMB just to see if I can pick up on anything now that I know all the twists.  I thought they were integrated perfectly into the plot, but not in such an obvious way that I didn’t have a few other predictions before landing on who was apart of the actual twist.  I didn’t figure out who it was (or was it more than one person?  Ooooh….) until right before the main characters came to the conclusion.

It’s actually pretty scary how electronic devices and social media accounts can be manipulated, and how dangerous the results of that are.  Am I going to stop using social media?  Of course not.  But it’s definitely something to be aware of.

ALSO, I don’t really consider this a spoiler because I’m not telling you who they are, but we do get to find out who MET is, and there is a conclusion with Blair and Dr. Regan.  I won’t tell you what happens, but there is a satisfying ending to the books.  No crazy cliffhangers!  I don’t want to say too much else, because I’m afraid I’m going to accidentally spoil something.  That being said, please message me on Twitter or leave a comment below with your username if you have read it so we can discuss!!

Overall, this was a great read, and I know I’ll be rereading both books again in the future.  If you haven’t already, make sure you buy ‘Follow Me Back’ and preorder ‘Tell Me No Lies’!  It will be released by Sourcebooks Fire on June 5th!

*Thank you so much to Sourcebooks Fire for sending me an ARC to review!!

PREORDER ‘TELL ME NO LIES’ HERE: