Skip to content
Posted on September 4, 2018September 7, 2018 by buriedinabookshelf

‘Dare You to Lie’ By: Amber Lynn Natusch

When her FBI agent father is framed for murder, Kylene is forced to move in with her grandfather, back to the small town that turned its back on her, and the boy who betrayed her.

All Ky cares about is clearing her father’s name, but someone won’t let her forget the photo scandal that drove her away two years ago. As the threats gain momentum, Ky finds an unlikely ally in the rookie FBI agent sent to keep an eye on her.

Determined to expose the town’s hidden skeletons, Ky unwittingly thrusts herself into a much bigger plot. They thought she’d forgive and forget. They’re about to learn they messed with the wrong girl.

‘The Leading Edge of Now’ By: Marci Lyn Curtis

*Check out my interview with Marci!

Just when Grace is beginning to get used to being an orphan, her estranged uncle suddenly comes forward to claim her. That might have been okay if he’d spoken to her even once since her father died. Or if moving in with Uncle Rusty didn’t mean returning to New Harbor.

Grace once spent the best summers of her life in New Harbor. Now the place just reminds her of all she’s lost: her best friend, her boyfriend and any memory of the night that changed her forever.

People say the truth will set you free, but Grace isn’t sure about that. Once she starts looking for it, the truth about that night is hard to find — and what happens when her healing hurts the people she cares about the most?

Sadie hasn’t had an easy life. Growing up on her own, she’s been raising her sister Mattie in an isolated small town, trying her best to provide a normal life and keep their heads above water.

But when Mattie is found dead, Sadie’s entire world crumbles. After a somewhat botched police investigation, Sadie is determined to bring her sister’s killer to justice and hits the road following a few meagre clues to find him.

When West McCray—a radio personality working on a segment about small, forgotten towns in America—overhears Sadie’s story at a local gas station, he becomes obsessed with finding the missing girl. He starts his own podcast as he tracks Sadie’s journey, trying to figure out what happened, hoping to find her before it’s too late.

A gun is sold in the classifieds after killing a spouse, bought by a teenager for needed protection. But which was it? Each has the incentive to pick up a gun, to fire it. Was it Rand or Cami, married teenagers with a young son? Was it Silas or Ashlyn, members of a white supremacist youth organization? Daniel, who fears retaliation because of his race, who possessively clings to Grace, the love of his life? Or Noelle, who lost everything after a devastating accident, and has sunk quietly into depression?

One tense week brings all six people into close contact in a town wrought with political and personal tensions. Someone will fire. And someone will die. But who? 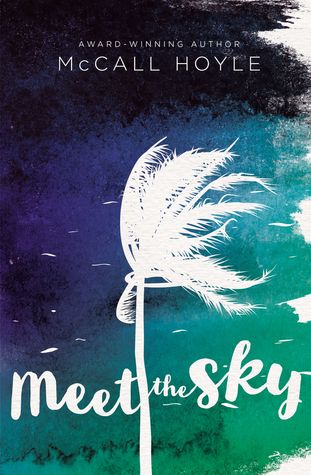 ‘Meet The Sky’ By: McCall Hoyle

It all started with the accident. The one that caused Sophie’s dad to walk out of her life. The one that left Sophie’s older sister, Meredith, barely able to walk at all.

With nothing but pain in her past, all Sophie wants is to plan for the future—keep the family business running, get accepted to veterinary school, and protect her mom and sister from another disaster. But when a hurricane forms off the coast of North Carolina’s Outer Banks and heads right toward their island, Sophie realizes nature is one thing she can’t control.

After she gets separated from her family during the evacuation, Sophie finds herself trapped on the island with the last person she’d have chosen—the reckless and wild Finn Sanders, who broke her heart freshman year. As they struggle to find safety, Sophie learns that Finn has suffered his own heartbreak; but instead of playing it safe, Finn’s become the kind of guy who goes surfing in the eye of the hurricane. He may be the perfect person to remind Sophie how to embrace life again, but only if their newfound friendship can survive the storm.

‘Ignite the Stars’ By: Maura Milan

A criminal mastermind and unrivaled pilot, Ia has spent her life terrorizing the Olympus Commonwealth, the imperialist nation that destroyed her home. When the Commonwealth captures her and her true identity is exposed, they see Ia’s age and talent as an opportunity: by forcing her to serve them, they will prove that no one is beyond their control.

Soon, Ia is trapped at the Commonwealth’s military academy, desperately plotting her escape. But new acquaintances—including Brinn, a seemingly average student with a closely-held secret, and their charming Flight Master, Knives—cause Ia to question her own alliances. Can she find a way to escape the Commonwealth’s clutches before these bonds deepen?

In this exhilarating edge-of-your-seat sci-fi adventure—perfect for fans of The Lunar Chronicles—debut author Maura Milan introduces our world to a thrilling new heroine.

Dexter meets This Savage Song in this dark fantasy about a girl who sells magical body parts on the black market — until she’s betrayed.

Nita doesn’t murder supernatural beings and sell their body parts on the internet—her mother does that. Nita just dissects the bodies after they’ve been “acquired.” But when her mom brings home a live specimen, Nita decides she wants out — dissecting living people is a step too far.

But when she tries to save her mother’s victim, she ends up sold on the black market in his place — because Nita herself is a supernatural being. Now Nita is on the other side of the bars, and there is no line she won’t cross to escape and make sure no one can ever capture her again.

Nita did a good deed, and it cost her everything. Now she’s going to do a lot of bad deeds to get it all back.