A teen rockstar has to navigate family, love, coming out, and life in the spotlight after being labeled the latest celebrity trainwreck in Jen Wilde’s quirky and utterly relatable novel.

As a rock star drummer in the hit band The Brightsiders, Emmy King’s life should be perfect. But there’s nothing the paparazzi love more than watching a celebrity crash and burn. When a night of partying lands Emmy in hospital and her girlfriend in jail, she’s branded the latest tabloid train wreck.

Luckily, Emmy has her friends and bandmates, including the super-swoonworthy Alfie, to help her pick up the pieces of her life. She knows hooking up with a band member is exactly the kind of trouble she should be avoiding, and yet Emmy and Alfie Just. Keep. Kissing.

Will the inevitable fallout turn her into a clickbait scandal (again)? Or will she find the strength to stand on her own? 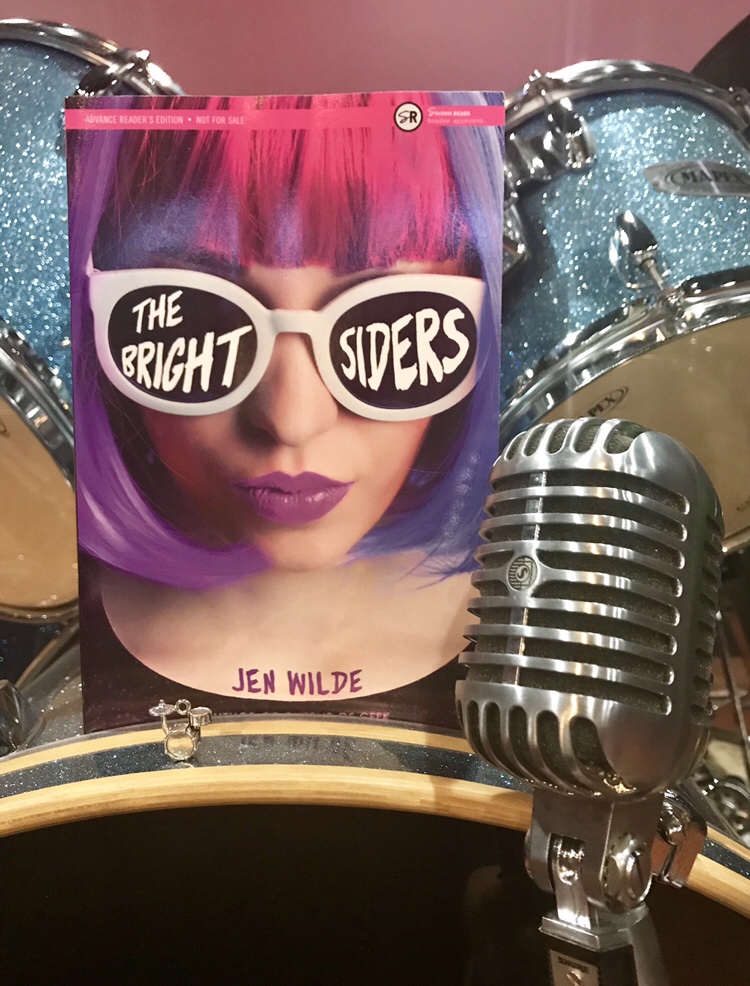 I read and loved Jen’s debut, ‘Queens of Geek’ last summer, and was super excited when I heard she was publishing another book with Swoon Reads!  That’s not the only reason I was excited though.  If you’ve been following my blog, you’ll know why, but I’ll explain it for those of you who might be new!  I’m a girl, obviously, but I’ve also been playing drums since I was five.  I’ll be 19 on Sunday, so as you can tell, I’ve been playing for almost 14 years, which is absolutely insane to think about.  My band, Double Identity, just released our debut EP a few weeks ago, after being a band for almost a decade, so needless to say I’m pretty excited.  Anyway, that’s why I was so pumped when I heard about this book.  I read a ton of YA books about music, but usually, it’s the dude love interest who is the musician, and if the girl is the musician, she usually just sings, or occasionally plays the guitar.  BUT, Emmy both sings and plays the drums, which is something that I’ve been doing for years.  Girl drummers are hard to come by in real life (and rarely do they also sing), and extremely rare in novels (the only other one I know of is ‘Leah On The Offbeat’).  So I really appreciated seeing myself in Emmy, since I don’t feel like I’ve ever really seen/read that before.

There’s a ton of LGBTQ+ representation in this book.  I don’t want to list them all out in fear of accidentally missing any of the characters, and also so I don’t spoil anything for any of you!  I’ll be the first to admit that I don’t know a whole lot about hardships and experiences of the LGBTQ+ community, so I obviously can’t comment on the accuracy of what is portrayed in the book, but I felt that Jen portrayed all of her characters in the way that they deserved to be written.  She did that in ‘Queens of Geek’ as well.  I know Jen is a part of the community, and I trust her wholeheartedly.  I really liked how the book talked about labels, and how no one should feel like they have to label themselves if they don’t want to, or because other people think that they should.  Emmy, the main character, is bisexual, and there’s a lot of talk of her fear of being labeled a ‘bad bisexual’, and how that doesn’t actually exist even though people say it does.  I also loved that the sexuality of each of the characters wasn’t the focal point of their identity.  Obviously, that’s how it should be, but unfortunately, that’s not always the case.  One of the reasons I think that non-straight/non-white characters are seen as “token” characters (I know sometimes they’re put into shows/books etc. for the reason, but that’s a whole separate tangent) is because we rarely get to see them in mainstream media, which is stupid.  Just because we don’t tend to see them on TV or in most books doesn’t mean those people don’t exist.  I would talk more, but this review is already getting super long, and I have to get back to the main plot of the book.

I loved loved loved our unicorn loving main character, Emmy.  She’s a flawed character, but that’s what makes her seem real.  I loved her relationships will all of her friends, especially with her friend Chloe, who uses they/them pronouns.  I think this was the first time I have ever read of a character using those pronouns.  Because of this, it took a bit for my brain to get used to seeing the words on the page because out of habit, I’ve been conditioned to expect to see her/he pronouns there.  Shoutout to society for that one.  Chloe was always hella supportive of Emmy, and I loved them for it.  All of Emmy’s friends were.

I also may or may not have squealed when characters from ‘Queens of Geek’ were mentioned.  Maybe.  Shh.  I won’t said when, where, or how often, but I absolutely love it when authors do that.  Love love LOVE it.  It’s like the perks of getting a sequel book but even better.

Alfie, aka King of the Man Bun.  This dude was complicated.  He and Emmy were so cute, and then he had to go and make me not like him, even though I DID like him.  Cryptic, I know.  But the history he and Emmy have and how close they are really shines through, and I love the relationship that the two of them have because it’s so healthy and supportive.  Jessie, Emmy’s girlfriend…I wanted to like her.  I really did.  And I did, for about 15 seconds.  You all will see once you read the book, but I liked how their relationship played out.  (Liked as in it was good writing, not that I necessarily liked Jessie.  But you’ll see.)

I feel like I’m definitely missing something, and I know this review has mostly been me rambling.  SO.  If you take anything away from this, it’s to GO. READ. THIS. BOOK.  It’s lovely and will give you all the feels, I guarantee it.

Overall, this book was great.  I read it in basically a day, absolutely tore through it, and you will too.  ‘The Brightsiders’ will be released by Swoon Reads on May 22, and Jen Wilde’s next book, ‘Going Off Script’ (which I’m totally obsessed with already) will be out in 2019.  In the meantime, go read ‘Queens of Geek’ if you haven’t already, and go preorder ‘The Brightsiders’!

PS:  In the photo, the drumset, vintage microphone, and drumset charm are obviously mine.  In a second picture, which I’ve included at the end of my blog post and also on my second account, @buriedinabookshelf, the headset microphone that I put on the book is the one that I use while I sing and play the drums during shows.

Target (Best price as of posting)

10 thoughts on “[ARC REVIEW] ‘The Brightsiders’ By: Jen Wilde”